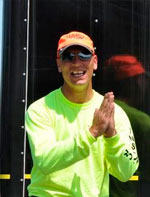 Chris Johnson began his motorcycling journey a long long time ago as a young man in England. After taking the CBT (compulsory basic training), and after making a lot of mistakes in rider’s choices, Chris found himself doing motorcycle track days. This is where Chris first discovered the value of training and set upon his journey to become an instructor.

Chris became a motorcycle instructor for both track and road riding which then lead him to become a mentor for the Institute of Advance Motorist for cars, trucks and motorcycles.

In 2005 Chris moved to the United States and found things to be very different in the process of training and receiving a motorcycle endorsement. After spending a few years settling into life in the Washington State and focusing on his first passion his two young boys Max and Sam, Chris found himself wanting to get back into training riders.